[et_pb_section admin_label=”section”][et_pb_row admin_label=”row”][et_pb_column type=”4_4″][et_pb_text admin_label=”Text” background_layout=”light” text_orientation=”left” use_border_color=”off” border_color=”#ffffff” border_style=”solid”] Last week I was working on the day job. 3 days in Heathrow working with a group of very talented executives who run a successful multinational company. My role was to enhance conversations, guide and challenge on strategy development and to get the board working as a cohesive team on issues that challenge both themselves and the company.
One particular issue in the company recently has occupied the attention of the executive. Interestingly it impacted heavily on the strategy discussions, introducing a bias in the importance on one particular element. As a result we set up a short team exercise, a simple task in appearance, but actually difficult in practice and challenged the team to solve it. Off they went. Now this team has a good balance of thinking styles and approaches. 10 minutes of discussion and experimentation ought to have revealed the answer, and in fact did exactly that later on. However, immediately on being challenged with the task, the team fell into a common trap that catches many divers and dive teams as well. Task Fixation.
Because the answer appeared simple, they failed to plan and failed to communicate, so the first attempt failed. This brought in a realisation that there was a more significant challenge here. Communication improved dramatically, but the team was co-operating now, but still not being cohesive. A couple of team members came up with a couple of ideas, good ideas and the team went for them, without challenge! This is not the way a high performance team operates. It uses the skills and approaches of each member to challenge and deconstruct ideas so that by the time the implementation is due, the expertise of the group has ensured that the most likely solution is achieved.
In diving we need to think carefully about the composition and the skills of our dive team. A future article here for sure. Once we have a cohesive team then that team needs to plan for every conceivable eventuality. Rehearse the plans, practice the skills and communications then if the pre-conceived incident occurs, roll out the response. This relies upon recognition of the cues that reveal a situation is emerging, easily missed if we over fixate on a task. This is not too complex to solve though, just a question of developing some scanning techniques. Where task fixation becomes really problematic is when we don’t recognise the need to adjust and change on the fly. The critical cues that warn us our broader attention is needed can be missed. For example, cell readings start to adjust at different rates to depth changes. Bubbles start moving sideways signalling a current pick up. We miss a backup computer failure.
I was reading some of Bernie Chowdurys accounts of dives on the Andrea Doria. The times he and other very experienced wreck divers had incidents were all down to narrowing of the focus, usually on collection of artefacts. Pushing penetrations to find the 1st class crockery. One incident on recovering plates resulted in an exit being lost due to silt stirred up by bagging the China. Easy as we sit here now to realise of course this would have happened. Very different when at 60m plus in a small locker inside the wreck when the plates are piled high.
Now, we need to concentrate to do well, so fixing on a task is good to ensure its efficient and timely execution, but this needs us to place trust in teammates. So the team need to take up the scanning, looking for cues as to what the environment will throw at us next. If we don’t have the team, then we need to take personal responsibility for adopting a consistent scanning strategy. This needs to be relevant, so rehearse it. Make a list, pop it in the wet notes, what do we need to check on the dive? Gas, time depth, PO2 for sure. Navigation, current, temperature, guideline integrity, overhead safety – pretty easy. What else though. Awareness of other divers – all good. The simplest and easiest check though is…
How long have I been doing what I’m doing?
Is that part of the plan?
Have I been aware of the passage of time and is that relevant to the depth I’m at?
This is simply the fastest way of checking to see if you are task fixated. When we invest our concentration into a task we can easily fall into the concept of flow, where time ceases to have meaning. For example, how many times have you done something (driven home, finished a project) that you think took a few minutes but all of a sudden its two hours later. Flow, if you’re in a safe environment is awesome. If your executing skills it’s tremendous. But if you’re in a fluid, changing and hazardous environment then flow can be a killer. Never be surprised when you check your computer for runtime.
Next time your teammate pulls on your fin or flashes you a light, don’t forget to thank them for ensuring you stay aware, they’re making sure you stay alive .
Dive smart, dive aware, dive safe. 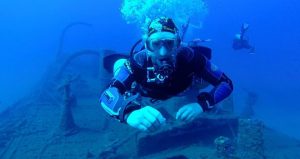